A Brief History of the BC Ferry & Marine Workers’ Union 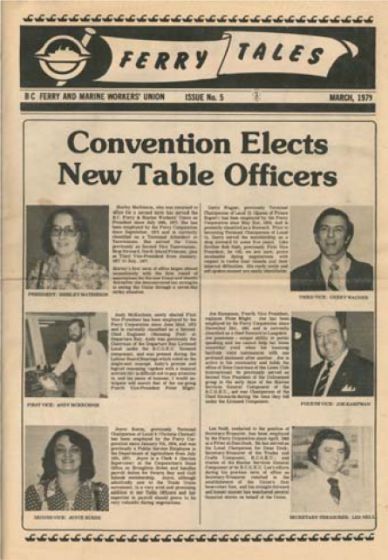 On January 1, 1977 the government reorganized the ferry service as a Crown Corporation. As the new employer was under the scope of the Labour Code, the way was paved for the formation of the BC Ferry & Marine Workers’ Union (BCFMWU).

The founding Convention of BCFMWU Unlicensed members was held in Victoria in January 1977. Almost immediately, the new Union was faced with negotiating a Collective Agreement. Negotiations, even with a mediator, were unsuccessful and on October 5, 1977 the way was cleared for strike action. The strike lasted only two days and a mediated settlement was reached after extensive negotiations.

After two years of legal battles, the Labour Relations Board, on April 27, 1979, made BCFMWU the sole bargaining agent for all ferry workers, including licensed officers. This decision finally brought all ferry workers into one organization.

The Coastal Ferry Act (CFA) was introduced in 2003 by the then Liberal Government. The intention was to put BC Ferries on the road to privatization. Shortly after the CFA was legislated, our Union began bargaining. When talks broke down, the response escalated to a fleet wide strike and public protest. After five days of bitter dispute and by mutual agreement, the parties proceeded to binding Arbitration under the oversight of Vince Ready.

The Collective Agreement that came out of the 2003 strike was for nine years and started the Exclusion/Inclusion battle that still continues today.

Today under Provincial President Eric McNeely, BCFMWU is the largest Maritime Union in Canada, representing over 3600 members, from across 35 vessels, 47 ports of call, and numerous other job sites. BCFMWU membership includes a diverse group of Trades, Ships’ Officers, Commercial Services Drivers and Unlicensed Workers, both ship and shore.

On November 17, 2015 BCFMWU members ratified a new 5 year Collective Agreement. Brother Graeme Johnston is only the second President in BCFMWU history to reach an agreement without a third party and prior to the expiration of the agreement.

There is much history yet to write for BCFMWU but we are forever grateful to those that fought for our Union and our members and we pledge to continue their legacy.

Homewood Health is the Canadian leader in mental health and addiction services with years of experience delivering the best possible support for Canadians. Our members will have a supportive, confidential, and caring environment for any challenge they may face.

Counselling is available in person, by phone, by video, or online.